Academy Head Coach Donald Lutz returns to lead this year’s BAWP and will be joined by several of Australia’s top coaches and players with Major League, Team Australia, and Australian Baseball League experience.

Bandits Academy staff will share their secrets to success in the areas of hitting, fielding, baserunning, throwing, game management, resilience and overall mental approach. It’s a one-of-a-kind opportunity for your player to take their game to the next level by working directly with Australia’s most successful and knowledgeable athletes and coaches.

This year’s BAWP will be a 6-week program. This program will be delivered twice in 2021 to allow us to create a more individualised learning experience for participants by reducing the numbers in each age group.

Our coaches aim to build a more holistic outcome for the individual that focuses on “Building the complete athlete”-both mentally and physically, on and off the field.

All age Groups will be limited to 28 participants. 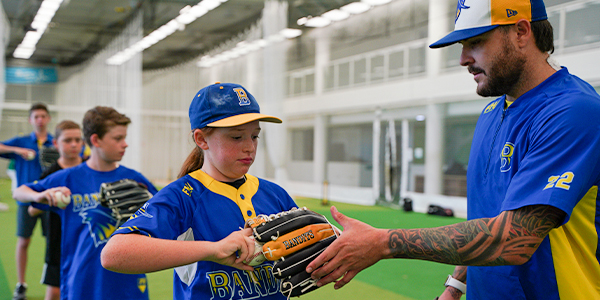 There will be two primary venues for this year’s Bandits Academy Winter Program:
– Viticon Stadium (Holloway Field) in Newmarket
– The Bupa National Cricket Centre in Albion.

Additional, optional official ABL Bandits gear for players and families is available through the Bandits Shop.

A member of the Bandits athletic training staff will be present during each session. All medical information on your player’s application must be completed prior to starting the program.

MEDICAL INFORMATION IS REQUIRED. A waiver will need to be submitted prior to any BAWP activities.

Need to cancel your player’s attendance in the Bandits Academy Winter Program? We do offer refunds. Please ensure your refund request is submitted in writing within 10 calendar days of the start of your session. You will be refunded all money paid or, if you wish to use your payment for a Bandits Credit, it will be transferable to family members or friends and good toward any future Bandits Academy Program (i.e., One-on-one Hitting Sessions, Holiday Camps, etc.) Contact Miranda Frisken at mfrisken@brisbanebandits.com.au for more information on refunds and cancelations.

To secure your limited spot, head to the website and click on the registration buttons above and your journey to taking your game to the next level begins!

Please check your email regularly as this is the Bandits Academy’s main form of communication for all programs. Any additional information that we need to convey as the program draws closer will be passed on via the email address you supplied when you signed up. Before, during and after each program, we’ll send out regular updates, so please look for Bandits Academy emails regularly to ensure you’re up to date on all Bandits Academy information.

Bandits Academy Programs are operated as independent programs and are not officially associated with the Australian Baseball League.